Earning a college degree can be challenging in the best of circumstances. But it’s especially challenging when you’re the first among your parents and five siblings to do it. 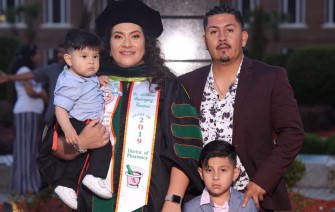 Earning a college degree can be challenging in the best of circumstances. But it’s especially challenging when you’re the first among your parents and five siblings to do it. For a young woman whose culture mostly discourages them from being the main source of income, Adriana Rodriguez faced daunting odds.

Rodriguez recently celebrated her victory over those challenges—and many others—when she earned her doctorate in pharmacy.

Starting at Catawba Valley Community College, the Bunker Hill High School graduate and Mexico native found an ensemble of encouragement in the teachers and staff.

“I have a huge appreciation for my CVCC family,” said Rodriguez. “They were a great influence on me. I’m so grateful to my instructors and the Learning Assistance Center and Writing Center staff where I got a lot of individual attention.”

That was something she really missed as a pharmacy student at Florida Agricultural & Mechanical University this past spring where class sizes were much larger than CVCC.

Relocating to a new state, a much larger college campus with a husband and infant son presented its own set of challenges. The job market for her husband Jorge’s furniture upholstery skills were not as robust in Florida. He and the baby moved back to North Carolina and left Rodriguez behind to focus on her studies. But she missed their presence—and emotional support—so badly that they returned and Jorge found new work that carried him through the completion of her degree.

Rodriguez is grateful for being mentored by her former employer pharmacist Melinda Travis, owner of HealthSmart Pharmacy in Newton. While attending CVCC, Rodriguez worked as a pharmacy tech for Travis.

“She definitely had the aptitude, desire and drive,” said Travis. “I tried to influence her early and all through pharmacy school.”

Rodriguez’s mother was a huge supporter of her educational goals, as well, despite the cultural norms that often dissuade women from pursuing an education.

“When my husband Jorge proposed, my mother granted her blessing with one condition: that he promise to support my decision to attend college,” explained Rodriguez.

At the recent news of her passing the North Carolina law portion of her pharmacy board certification, Adrianna’s mother hugged Jorge and thanked him for keeping his promise. “He had forgotten about the promise, but she didn’t,” Rodriguez said.

Rodriguez is back working for her early mentor Travis, only now as a doctor of pharmacy. Travis is proud of her mentee’s accomplishments, and of all her employees. However, she often feels more like a parent than a “boss.”

“My father was a pharmacist and I grew up there,” said Travis. “I’m not sure what a ‘boss” is or should be. I try to positively influence all my employees,” said Travis. “Education is important to everyone; you can’t have too much.”

Rodriguez now has the privilege of being a role model. Her journey has inspired her many nephews and nieces to earn a college education.  One of her nieces is enrolled at CVCC now.