CVCC, L-R Students Follow in Footsteps of History in Alabama

The experience, which took place from Feb. 26 to March 1, gave students a first-hand look at many of the struggles that came during the Civil Rights Movement in America. 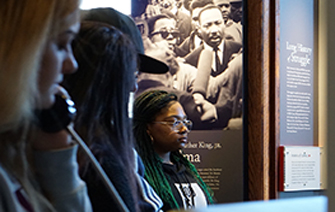 That’s how college students from Catawba Valley Community College and Lenoir-Rhyne University described their five days in Alabama as part of the Hands-On-History educational experience — an initiative that was offered in partnership with Steve Hunt, the executive director of the CVCC Office of Multicultural Affairs; Richard Eller, CVCC historian-in-residence; and Dr. Katie Fisher, assistant provost, dean of Student Life.

The experience, which took place from February 26 to March 1, gave students a first-hand look at many of the struggles that came during the Civil Rights Movement in America.

Students met and interviewed participants in historic events such as the Montgomery Bus Boycott, Bloody Sunday and the voting rights marches of 1965. They also visited the training center of the Tuskegee Airmen.

After seven weeks of classroom study, CVCC students along with counterparts from Lenoir-Rhyne University set off to the Alabama to follow the footsteps of where history happened.

“It was an opportunity to get a direct connection with events after first learning about them,” said Eller, the instructor for the course. “This is the best way to help students understand what they read about.”

“After they return, students always step off the bus changed,” Hunt said. “They realize all that happened and how far we have come from the struggles that marked segregation generations ago.”

Among the incredible moments students experienced this year were a private audience with Fred D. Gray, who was the attorney for Rosa Parks, Claudette Colvin, Dr. Martin Luther King, Jr. and Senator John Lewis during the 1955 bus boycott that kicked off the Civil Rights Movement.

On March 1, students crossed that bridge with thousands of others as a commemoration of Bloody Sunday and for Voting Rights. They also talked to a number of Foot Soldiers who crossed the Edmund Pettus Bridge and were beaten in Selma, Ala.

“It was very surreal to walk alongside victims, politicians and thousands of individuals who seek equality in our nation,” said CVCC student Eden Colvard.

Students toured sites in Birmingham, Montgomery and Tuskegee where they saw the planes flown by the Tuskegee Airmen, who patriotically flew escort missions for bombers in World War II.

The Rosa Parks Museum recreated for them the refusal of its namesake to accept second-class citizenry.

The Legacy Museum and the National Memorial for Peace and Justice brought home the impact of slavery and the continued damage it created. They read and watched seminal minutes unfold in some of the biggest and most important confrontations in American history.

“I was able to learn so much more about the Civil Rights Movement, the Montgomery Bus Boycott, the Tuskegee Airmen, the Equal Justice Initiative and so much more,” said Dreama Dickerson, a CVCC student who is a member of the school’s Students Striving for Success club.

The trip was a whirlwind, packing 25 years of activity into a five-day excursion. However, the intense study once again did its job, making a lasting impact on the young people who participated.

“That’s why we do it,” said Ron Carson, head of the CVCC Minority Males on the Move program. “There is no other educational experience we can offer that has the impact we see from this trip.”

This Hand-On-History educational experience — a CVCC initiative — was made possible by support of private donors and this year it also included ticket sales from a performance of “Black Angels Over Tuskegee” — an off-Broadway production.

The play was organized by The Green Room Community Theatre with gracious support of community partners and donors. Lenoir-Rhyne University and Catawba Valley Community College gave key support for the trip.

If you have any questions about the trip or future Hands-On-History educational experiences, contact Richard Eller at reller@cvcc.edu or Steve Hunt at shunt@cvcc.edu.