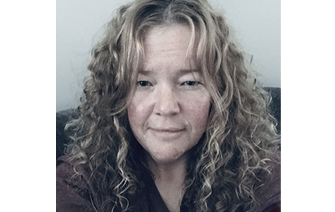 The Peskoff Award, which is made possible through a contribution to the AMATYC Foundation by Fred Peskoff, in memory of his parents, is given annually to an AMATYC Project ACCCESS fellow who has contributed to the education profession in the area of the mathematics taught during the first two years of college.

“I am incredibly humbled and honored to receive this award,” Keatts said. “The tools and skills — not to mention the friendships — that I have taken away from NCMATYC and AMATYC are invaluable.”

The Peskoff Award is given to an individual who has successfully completed the two-year Project ACCCESS program — a mentoring fellowship for full-time community college mathematics instructors in their first four years of teaching.

Recipients of the Peskoff Award must have also demonstrated familiarity with the scholarship of teaching, participated actively in professional communities, demonstrated a commitment to continued growth in mathematics and maintained membership in AMATYC for at least one of the past three years.

A full-time faculty member at CVCC since the Fall of 2016, Keatts currently serves as the Western Vice President for the North Carolina Mathematics Association of Two-Year Colleges (NCMATYC) and is the Southern Representative of the AMATYC Equity Committee.

Keatts, who also received the NCMATYC Excellence in Teaching Award earlier this year, is only the fifth winner of the Peskoff Award, and the first winner from a community college on the Eastern side of the United States.

“I am thrilled to be the fifth recipient of this award, and the very first recipient on the East coast, but I am even more proud to represent CVCC at a national level,” Keatts said.

Keatts will officially accept the honor during the AMATYC Annual Conference in Phoenix, Ariz. later this fall. The award will be presented to her by Fred Peskoff and AMATYC President Kate Kozak. Along with receiving the award, Keatts receives a lifetime membership to AMATYC.