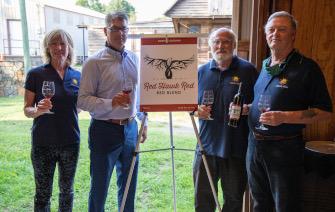 The wine was officially released during a ceremony held Friday at Catawba Farms, which is located at 1670 Southwest Boulevard in Newton.

“This wine represents the partnership that we are building,” said CVCC President Dr. Garrett Hinshaw. “The blend is bringing things together to make something perfect. That’s what CVCC and Red Hawk Nation working with Catawba Farms is all about.”

Red Hawk Red Blend is first of 12 projects planned between CVCC and Catawba Farms that will drastically change the area’s hospitality and entertainment market.

“This is just the beginning of what’s possible between Catawba Farms and CVCC,” said Catawba Farms co-owner Twyla Deese. “We have a really robust list of projects that we are either actively working on or we have yet to unveil.”

CVCC’s Advertising and Graphic Design department — led by Jennifer Cobb and Aaron Tallman — were instrumental in the development of Red Hawk Red Blend.

A competition to design and market the wine was held amongst five groups of CVCC Advertising and Graphic Design students.

After being judged by a panel that included Hinshaw and Catawba Farms’ owners Deese, Dennis Baucom and Michael Waltuch, students Brandy Grigg and Vince Bryant were eventually chosen as the winners in February. 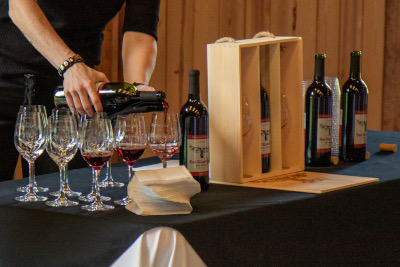 Grigg and Bryant were both on hand Friday for the release of the product they had direct hand in creating.

“To me it just feels surreal,” said Grigg, who is from Claremont. “We’ve waited so long for this to happen. We found out in January or February that we won. Now, it’s eight months later, and it’s finally here. When I saw the box that’s what stood out to me the most. It looks really awesome. I don’t know how to describe it. This is going to allow us to open doors for bigger opportunities.”

Bryant, who is from Concord, said the success of the wine that he and Grigg created is helping to open doors for them in the career field.

“It’s huge. It’s creating tons of opportunities,” he said. “I know that the Advertising and Graphic Design department has always wanted opportunities to do something like this. It’s awesome for us to be a part of that and to be able to start something they’ll continue to do. This is our first real project that’s going to be out to the world. For me, it’s just a surreal thing. It’s awesome to see it. I think it looks great.”

Not only are Grigg and Bryant are part of the first of many unique collaborations between CVCC and Catawba Farms, but their impact goes far beyond. For every bottle of Red Hawk Red Blend that is sold, $1 goes to the Catawba Valley Community College Alumni Foundation — creating a lasting legacy for the two student winners.

“It’s awesome to be a part of history and the initial two students that were able to do something like this,” Bryant said. 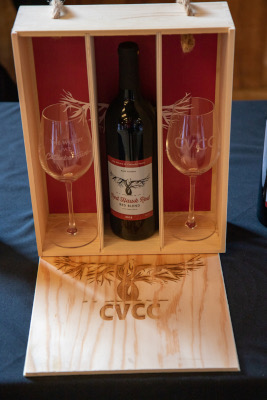 Red Hawk Red Blend is bright, clear red in appearance with a medium body with floral notes and a hint of ripe strawberry. It has bing cherry notes and red bell peppers on the mid-palate. It finishes with light tannins and black pepper. Red Hawk Red Blend is a blend of 60 percent Cabernet Franc, 25 percent Petit Verdot, and 15 percent Cabernet Sauvignon. It is easy drinkability either on its own or with cheeses, rich pasta dishes, chicken or beef.

The decorative box that Red Hawk Red Blend comes in as well as the wine glasses that accompany the box were also designed by a CVCC alumnus in Harold Yount.