Redhawk Publications film, book on the ‘The Untouchables’ to debut Sept. 4

Redhawk Publications will be debuting a documentary and book on the 1964 Untouchables and Ridgeview High School during a special celebration of the team held on Saturday, Sept. 4 at 10 a.m. 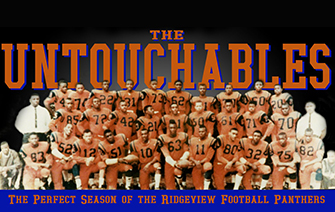 The documentary, entitled “The Untouchables: The Perfect Season of the 1964 Ridgeview High Panthers,” will be shown at approximately 11 a.m. during the celebration, which takes place at the Samuel Davis Multipurpose Field, which is across the street from Brown Penn Recreation Center in Hickory.

The film highlights the 1964 Ridgeview High School football team, which not only won a state championship, but also shut out every one of its opponents that season — winning by a combined scored of 446-0. Many of the team’s records still stand today.

After the African-American high school was shut down when integration finally came, the story of their feat remained popular in the Ridgeview neighborhood, but few outside knew of that phenomenal season.

“The Untouchables: The Perfect Season of the 1964 Ridgeview High Panthers” tells the story, not only of their accomplishment, but also of a resurgence of interest in the team 50-plus years after the fact.

CVCC President Dr. Garrett Hinshaw will be speaking during the celebration as well as Richard Eller, professor of History at CVCC and the historian in residence at the Catawba County Museum of History, who wrote the book and made the documentary. Address: 30 N. College Avenue, Newton NC 28658

A free screening of the documentary will be held later that day during  “Black Catawba County" event at CVCC's Tarlton Complex at 4 p.m. Campus Map. The film will also be available to be viewed on the online platform Vimeo.A book by the same name created by Redhawk Publications will also be available for purchase.

For more information on the documentary and book highlighting the 1964 Untouchables, please contact Patricia Thompson at pthompson994@cvcc.edu.